Thank you Council Members, Speaker Johnson and Committee Chair Rodriguez for convening this important emergency hearing. For 45 years Transportation Alternatives has advocated on behalf of New Yorkers for safer, more inclusive and more livable streets. With more than 150,000 people in our network and over 1,000 activists throughout all five boroughs we fight to promote biking, walking, and public transportation as alternatives to the car.

We would like to express our gratitude to this Council, the Committee on Transportation, the NYC Department of Transportation, the NYPD and other City agencies for your hard work investing in Vision Zero, which has resulted in historic reductions in the number of people killed, even as traffic fatalities have increased nationwide.

Still, however, the loss of life on our streets is unacceptable. Since 2001, more than 5,000 New Yorkers have lost their lives in traffic on city streets. Every day 200 people are injured. Much more can and must be done. Traffic violence is a public health crisis, and Transportation Alternatives strongly supports the legislation of today’s hearing as critical means to reduce dangerous driving, prevent the loss of life and achieve Vision Zero by 2024.

Transportation Alternatives strongly supports resolution 268, which calls upon the New York State Legislature to pass, and the Governor to sign, legislation to (1) renew and expand the use of speed safety cameras in New York City, (2) provide for the escalation of penalties and consequences for multiple motor vehicle violations, particularly for notices issued from red light and speed cameras, and (3) legislation to require physicians to report medical conditions or incidents that indicate a driver is at high risk of suddenly losing consciousness or vehicle control.

Speed safety cameras save lives. While speeding is a leading cause of traffic fatalities, New York City’s speed camera program has, for the past four years, reduced speeding, reduced injuries and saved lives. At the average camera location speeding is down 63% and fatalities are down 55%. But because of state law these cameras have been restricted to just 140 school zones even though our city has more than 2,000 schools, along with other severe restrictions that prevent the cameras from operating outside of school hours, when New Yorkers are at the greatest risk, and prevent them from being placed at the most dangerous locations.

And unforgivably, this June, the New York State Senate ended session without passing legislation (S6046-C/A7798-C) to renew and expand this life-saving program, even as the Assembly passed it in two different pieces of legislation (A7798-C and A11189), the Governor has promised to sign the bill, and as there are 35 Senate cosponsors to the bill - more than the majority needed for passage. This Council is doing its job on this vital issue. The State Senate must do theirs immediately.

On September 5, 1.1 million schoolchildren will start their school year. It is critical that this Council sends a strong united message to the New York State Senate Majority, making it clear that the blood of children and New Yorkers killed in crashes they are preventing us from stopping, will be on their hands, and that they must reconvene and pass S6046-C before September 5.

Transportation Alternatives strongly supports Intro 322, which would create a checklist of proven street safety and accessibility measures that the DOT must consider when reengineering or repaving any arterial street in New York City, and, critically, the DOT must publish online any reason for not including a particular design element.

The DOT has done tremendous work in recent years and is setting a national standard for saving lives on city streets. But it remains clear that much more must be done, and as a city we must prioritize saving lives, inclusivity and diverse mobility over the movement of cars. The majority of the crashes that killed 222 people last year occurred on arterial streets and were caused predominantly by behaviors like speeding and failing to yield. These behaviors are too often enabled by street design that prioritizes motor vehicle movement and convenience, with the safety and experiences of pedestrians and cyclists too often relegated to an afterthought. A standardized street design is needed so that safety can be ensured by default. Once built, these streets are not subject to the shifting winds of politics.

The complete streets checklist will be an important step towards creating transparency and for the public to know when, for example, a proven safety element is sacrificed in order to preserve one or more parking spots. Furthermore, in order to be truly equitable and effective, street design and safety measures must be consistent across neighborhoods. No part of the city can be left behind.

Vision Zero is built upon three pillars: Education, Enforcement, and Engineering. The third arguably holds the opportunity to save the most lives, because once improvements are literally set in stone, they last for decades, consistently guide driver behavior, and do not require constant monitoring in order to ensure compliance. Without comprehensive arterial road design, New York City simply cannot achieve the goal of eliminating traffic deaths and serious injuries. New York must fundamentally shift how we view our streets and allocate space for different modes of travel. A Vision Zero street will prioritize the highest-capacity modes of transportation, like walking, biking, and public transit, over the single-occupancy car.

The Complete Street Checklist shows how streets can be re-engineered to prevent dangerous driving and encourage multi-modal usage, it aims to pave a practical way toward creating a city where crashes are preventable and deaths and serious injuries can be eliminated. The checklist aims to create complete streets. A complete street in the age of Vision Zero in NYC has the following three core functions:

By employing the safety elements of this checklist, our city can cement a lasting legacy of safety into our streets. That legacy will encourage more people to walk and ride bikes, make bus service more efficient, and enhance the mobility of the elderly and disabled. If the safety elements of the checklist are applied universally, the number of preventable crashes could fall to zero. 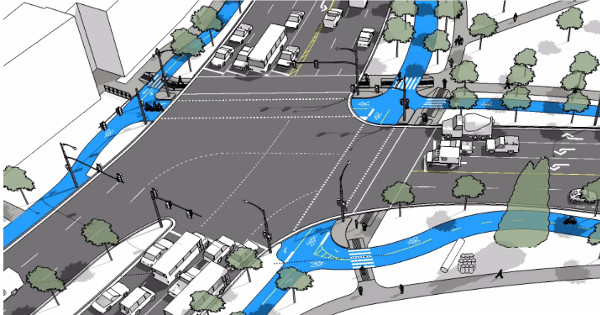 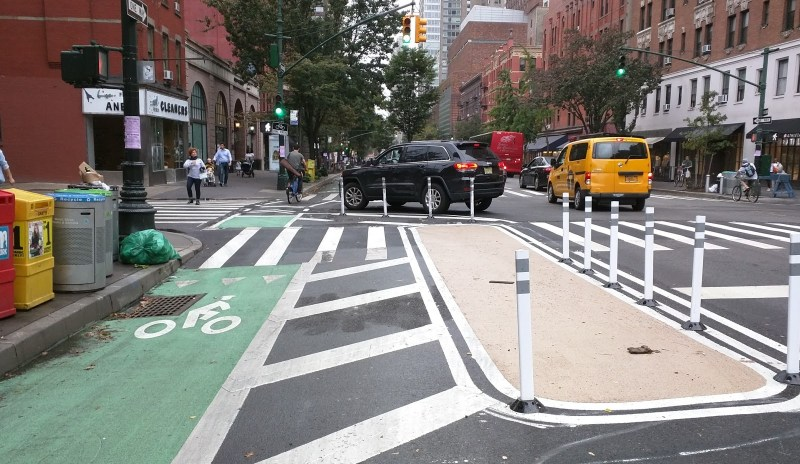 Transportation Alternatives supports these bills. In particular, we were all reminded of the urgent need for intro 971 to impound the vehicles of repeat dangerous drivers when, in March 2018, Joshua Lew, 1, and Abigail Blumenstein, 4, were killed in a crosswalk in Brooklyn by a driver with multiple speeding and red light violations.

A car is a 4,000+ lbs lethal object capable of causing death in a split second, particularly when traveling at high speeds. If an operator repeatedly endangers others through the dangerous instrument that a car is, our City must be able to impound that vehicle and require a safe driving course for the owner.

Speed radar display signs can cause drivers to reduce their speeds, and they need to be deployed wherever they can limit risks to life and limb, especially near our city’s schools. It is important to note, however, that radar speed display signs can never be a replacement for speed safety cameras, and we can not allow those who deny the life-saving efficacy of speed cameras to use any other safety element as an excuse for not reauthorizing and expanding the use of speed safety cameras in our city.